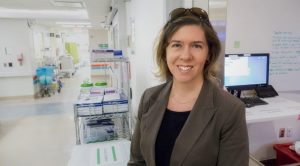 There are many potential harms children are exposed to during childhood – but unnecessary radiation doesn’t have to be one. That’s what Suzanne Beno and her colleagues believed as they set out to reduce the number of abdominal/pelvic CT scans ordered for children presenting to SickKids’ trauma bay. Their work – highlighting a significant drop with no adverse events – has just been published in the Canadian Journal of Emergency Medicine.

Beno was a learner in CQuIPS’ EQUIP program in 2017 when this work was starting. As the co-medical director of SickKids’ trauma program, Beno noticed there was an increasing and higher than usual level of abdominal/pelvic CT scans being ordered for children after trauma, yet a large proportion of the scans were coming back normal. An audit confirmed her suspicions – trauma teams were scanning more than published norms, which were already documented to be too high. With mentorship from EQUIP co-director Kaveh Shojania, Beno led the work to change that trend.

“We undertook this as a quality improvement (QI) initiative using the model for improvement with multiple PDSA cycles. We initially developed a trauma imaging diagnostic algorithm because we found people didn’t have a local guideline to help decide on when CT imaging was indicated,” she said. “We also developed just in time clinical decision support, making it clear that ‘mechanism of injury’ on its own was not an indication for CT and the child needed to meet specific criteria to justify getting an abdominal CT after trauma.”

Further PDSA cycles helped determine how teams used the guidelines and clinical decision support, then again once the hospital moved to an electronic medical record. While this was underway, the initiative was chosen as a hospital Choosing Wisely project, increasing visibility and awareness throughout SickKids.

The results were significant, dropping from a baseline of 26.8 per cent of children at very low risk of an intraabdominal injury having abdominal/pelvic CT scans obtained to less than seven per cent with the interventions in place – importantly, with no missed injuries. These results have been sustained and the initiative remains ongoing.

“Not only did this mean fewer children exposed to significant ionizing radiation – about 25-30 children per year,” she said, “it also resulted in numerous resource stewardship benefits.”

Beno credits the EQUIP program as a factor in the project’s success.

“Kaveh helped refine our AIM statement and proposal and looked at it from a pragmatic and academic stance,” she said. “EQUIP had a huge role in making sure this project launched and was successful.”

Beno hasn’t slowed down since the CT scanning project wrapped – her team has been involved in other QI initiatives, including instituting a new massive hemorrhage protocol and trauma video review, and she’s about to begin working on a project to reduce non-value added time in the trauma room.

“Trauma is ripe for process performance improvement and QI,” she said. “It’s about understanding that things aren’t stagnant – the field is constantly moving forward, and we need to continually improve our processes to optimize patient outcomes. At the same time, QI is also about job fulfilment and satisfaction – it helps us make sure we’re doing the best job that we can in a complex and challenging environment.”

Share This
Copyright 2022 CQUIPS - All Rights Reserved | Developed By: Enveos | Designed By: Alexia Wong
We use cookies on our website to give you the most relevant experience by remembering your preferences and repeat visits. By clicking “Accept All”, you consent to the use of ALL the cookies. However, you may visit "Cookie Settings" to provide a controlled consent.
Cookie SettingsAccept All
Manage consent

This website uses cookies to improve your experience while you navigate through the website. Out of these cookies, the cookies that are categorized as necessary are stored on your browser as they are essential for the working of basic functionalities of the website. We also use third-party cookies that help us analyze and understand how you use this website. These cookies will be stored in your browser only with your consent. You also have the option to opt-out of these cookies. But opting out of some of these cookies may have an effect on your browsing experience.
Necessary Always Enabled
Necessary cookies are absolutely essential for the website to function properly. This category only includes cookies that ensures basic functionalities and security features of the website. These cookies do not store any personal information.
Non-necessary
Any cookies that may not be particularly necessary for the website to function and is used specifically to collect user personal data via analytics, ads, other embedded contents are termed as non-necessary cookies. It is mandatory to procure user consent prior to running these cookies on your website.
SAVE & ACCEPT
Back To Top
×